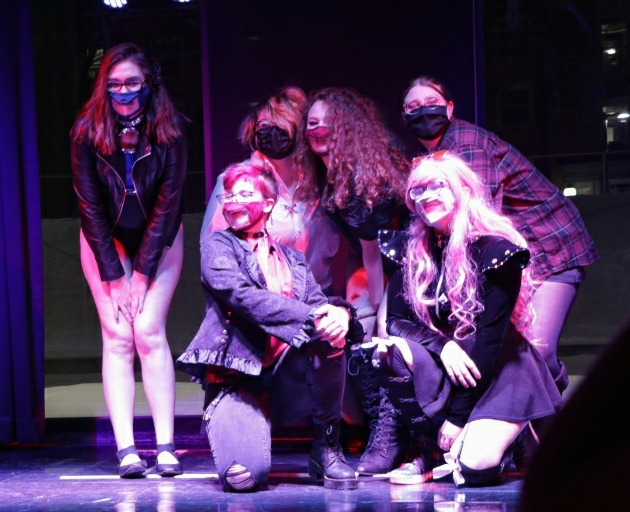 The SCSU Drag Troupe gave their first show of the semester Thursday, Feb. 17, at The Quarry of Atwood Memorial Center. The amateur night show’s theme was Valentines, in which the song choices of the performers were mainly love or breakup songs.

The SCSU Drag Troupe has been active for several years and is still growing. It was initially a part of the SCSU LGBTQ center, that is until a lack of opportunities to adequately express themselves were found, so they branched off to creating their own club. In addition, “… it is also one of Minnesota’s first original drag troupe[s]”, says Parker, treasurer and support troupe leader of the SCSU Drag Troupe.

The SCSU Drag Troupes purpose of having drag shows is to allow members to find their own voice by expressing it through dances, facial expressions, music, makeup, and so on in their performances. The purpose of having drag shows for the public is to “…clear misconceptions of what drag is, it is a very safe place for those who want to be in a sort of environment that is very accepting of them and their identities”, says Cecil, a member of the SCSU Drag Troupe.

Parker initially joined the troupe by seeing their table set on campus in addition to their friends already in the troupe. Cecil joined the drag troupe with a friend initially as a support to learn about it, and to get rid of toxic ideologies that drag is just about the common misconceptions people have of it.

Besides the messages SCSU Drag Troupe wants to give to the public about their personal identities and drag, not all SCSU drag shows are the same every time they are held. For example, there are age restrictions based on the maturity levels of performances given; the highest age restriction is generally ages 18 and up, while the lowest age restriction is generally ages 15-16 and up. Some shows are free, but on the other hand, some shows will have attendants pay due to the contributions of the amazing performers.

A couple of notable things SCSU Drag Troupe has achieved are their collaborations with Central Lake Colleges in Brainerd, MN, and especially continuing to give shows during the pandemic. Some improvements both SCSU Drag Troupe members Parker and Cecil say is to practice and prepare more because “the more [you] practice, the better you will be”, says Cecil, in addition to hoping for larger crowds in future shows.

The SCSU Drag Troupe practices in the basement rehearsal room of Atwood Memorial Center every Wednesdays at 8:00pm. They also have an Instagram page @scsudrag and a Facebook page “SCSU Drag”.