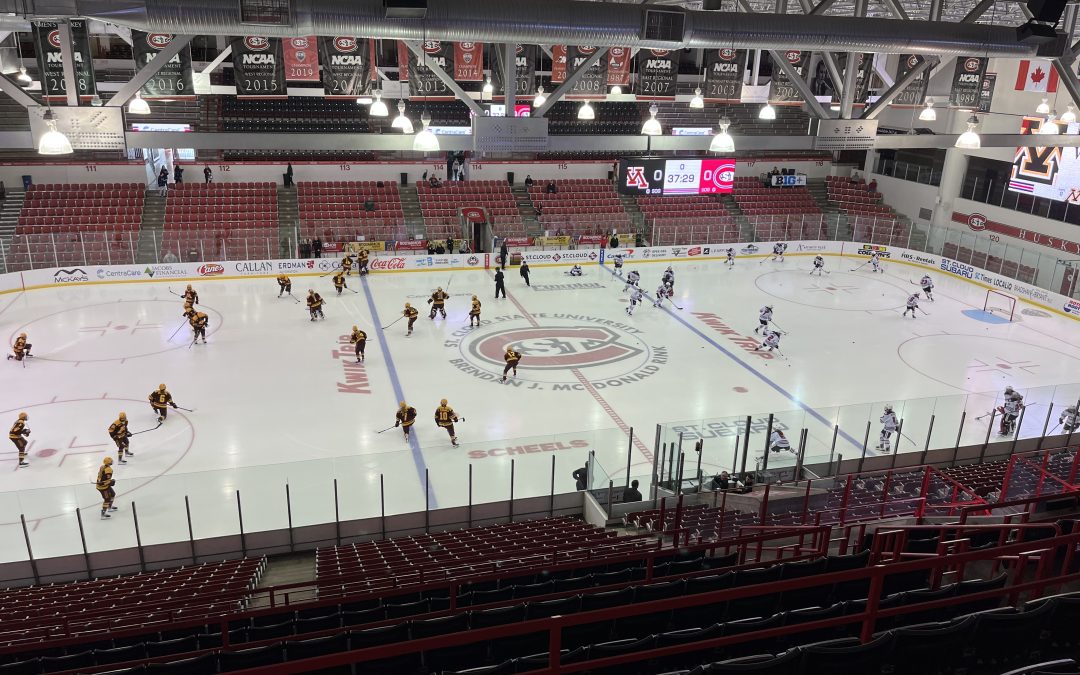 The women’s hockey team played host to the Minnesota Gophers in their homecoming game on Friday, Oct. 21. This was the first game in a two-game series against the University of Minnesota Twin Cities.

U of M got off to a quick start when Abbey Murphy scored on the first shot of the game for the Gophers, making the score 1-0.

Goals continued to come early and often for the U of M as Abigail Boreen found the back of the net on the power play, just under four minutes after Murphy’s goal put Minnesota ahead 2-0.

Later in the period, Grace Zumwinkle and Taylor Heise snuck the puck past Huskies’ goaltender, JoJo Chobak, making the score 4-0 Minnesota heading into the first intermission.

The Gophers maintained a consistent level of pressure on the Huskies as they scored on four of the 10 shots they took in the first period.

The second period was much more evenly played. U of M still outshot the Huskies by two but was unable to add to the lead.

The Huskies weren’t done yet, though, as Olivia Cvar was able to score again for the Huskies just a minute and 13 seconds after Hymlarova’s goal, making the score 4-2 and setting up a very exciting third period.

When asked about the adjustments made between the first and second period, St. Cloud State head coach, Brian Idalski, said, “We just talked about some of the details and some of the things that we had discussed over the course of the week. They (U of M) scored a couple nice transition goals (in the first period), and we can’t give those up.”

The third period was very evenly matched through the first five minutes with both teams getting numerous shots on goal.

U of M was eventually able to take control midway through the third period as they began to control the pace of the game. The Gophers piled up many shots on goal and were able to double the Huskies in shots, but JoJo Chobak stopped all of them to keep the score 4-2.

When asked about Chobak’s performance postgame, Coach Idalski said he was “super happy with JoJo, mental toughness to hang in there… she could’ve packed it in, but we told her we’d be better in front of her… she made some key saves to help us hang around. I’m proud of where she’s at as she continues to develop and get better.”

The Huskies generated many chances on the power play but were unable to find the back of the net. Time would run out on the Huskies as the Gophers won the game by a final score of 4-2.