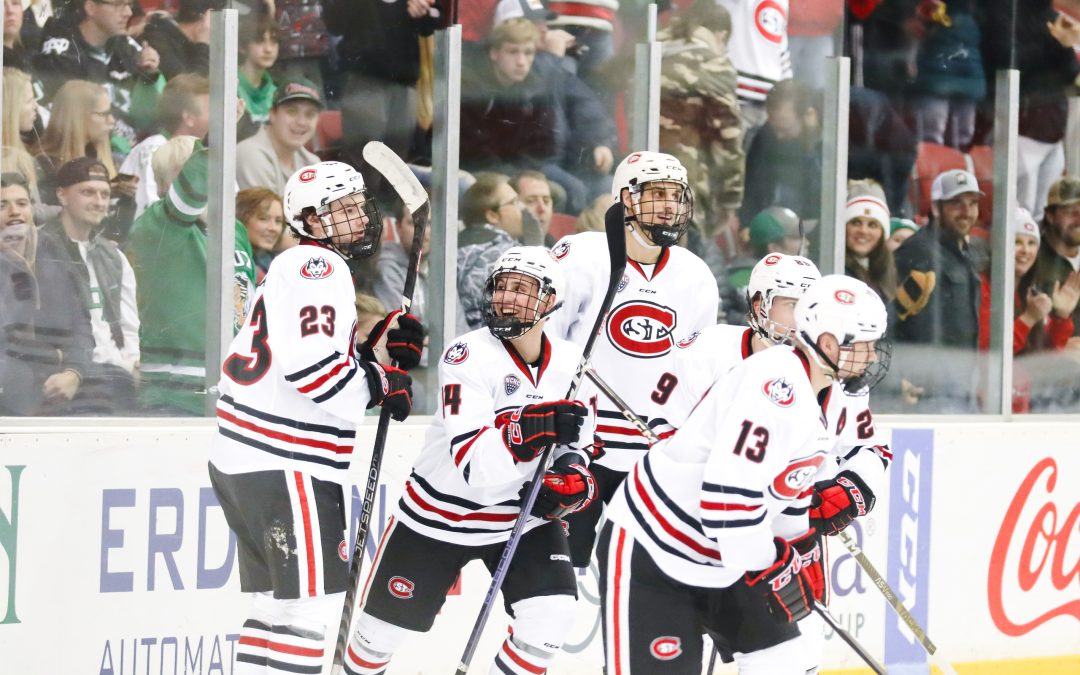 After not being scheduled for a series the weekend prior, the men’s hockey team was coming off a resting period, one that would prove to be beneficial when taking on NCHC rival, the University of North Dakota. The last time these teams met resulted in a loss and a tie for the Huskies, so the team was looking for vengeance.

5th year captain defensemen Spencer Meier would again not be in the lineup due to an upper-body injury, but senior Kyler Kupka would make his return after undergoing an appendectomy prior to the Denver series.

North Dakota would open scoring on Friday night with Griffin Ness finding the back of the net less than three minutes into the opening period. Not long after, alternate captain Aidan Spellacy would tally a goal for the Huskies. Spellacy is one who can go unnoticed on the ice, but his offensive play as of recent has proven he deserves a consistent spot in the line-up.

The Fighting Hawks would find the back of the net only once more in game one, with the second goal coming from freshman standout Jackson Blake out of Eden Prairie, MN. After Blake’s goal, the Huskies would take the lead with goals coming from Jami Krannila, a shorthanded goal from Grant Cruikshank, Jack Peart’s first of the season, Veeti Miettinen, and Kyler Kupka scoring on the powerplay in his return.

St. Cloud State would kill off all three penalty kills, not leaving room for the mistakes UND would make. While the Huskies would get the victory in game one, the real fight would be in game two.

Like expected, Saturday would be the real test for the Huskies. We have seen this before, with last time the Fighting Hawks were at the Brooks Center, Friday night’s game was won with ease while game two was disappointing for the Huskies.

North Dakota came out strong, with three goals being scored in under 9 minutes of play. Matteo Constantini would score his first of the year, followed by Gavin Hain and Riese Gaber, both powerplay goals. Coming 23 seconds after the Hawks third goal, Brendan Bushy would create momentum, scoring his second of the year.

Following Bushy’s goal, the Huskies would take full control of the game. Senior Zach Okabe would score a natural hat trick with goals coming at the 18:12 mark of the middle frame and 0:55 and 7:05 of the final frame.

Two more Huskies would find the back of the net, with both Kyler Kupka and Jack Peart scoring their second goal of the series to round out scoring in the final game of the series. In both game one and game two, St. Cloud State would score six unanswered goals to give them the first sweep over the Hawks in decades.

In speaking with Coach Larson following Saturday’s victory, one word the team used to describe themselves is, “resilient.” This season, the Huskies are making headlines for their dedication to the game and their no-quit mentality.

Coming up next for St. Cloud State, the team heads to Oxford, Ohio to take on the Miami Redhawks in another NCHC battle.