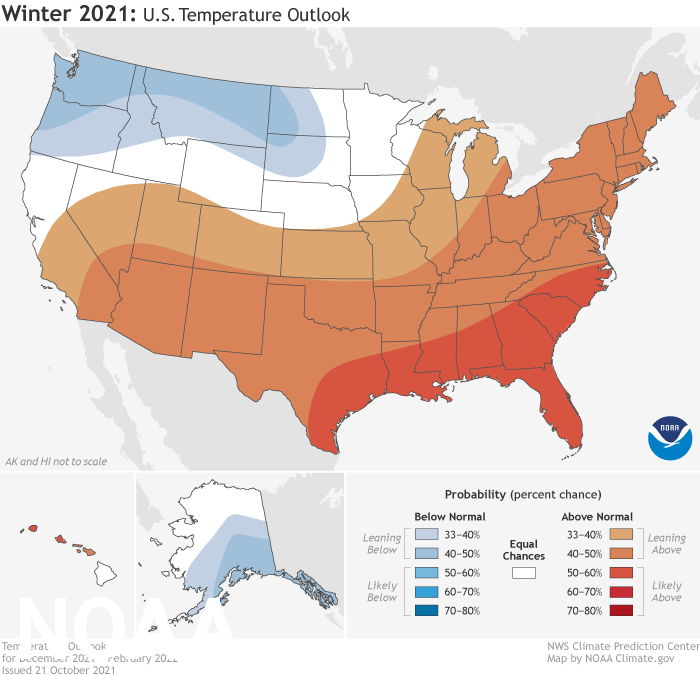 Outlooks for what the Winter season temperatures for 2021-2022. Photo courtesy of NOAA Climate.Gov

The National Oceanic and Atmospheric Administration recently released their 2021-22 Winter Weather Outlook, and La Niña winter is back for yet another consecutive year. Per NOAA, La Niña is defined as cooler than normal sea-surface temperatures in the central and eastern tropical Pacific Ocean that impact global weather patterns. Another type of winter we could be in is called an El Niño. During El Niño, trade winds weaken. Warm water is pushed back east, toward the west coast of the Americas.

The Winter Outlook from NOAA covers the months of December through February, which is known as “Climatological Winter.” For the state of Minnesota, we are looking at an equal chance for above-, near-, and below-normal temperatures as well as precipitation. Equal chance simply means we have an equal chance of seeing below average, above average, or average precipitation and temperatures. In typical situations, when a back-to-back La Niña winter occurs, the second winter is the colder and wetter one of the two. With that being said, we could be seeing a more snow-filled and chillier winter this year due to the La Niña pattern forecasted for this winter.

We have been in a La Niña winter in Minnesota before, and the outcomes have been totally nonidentical. Last year, we had a La Niña winter that ended up a lot warmer than average and drier than usual. The same scenario appeared for the. 2011-2012 winter season where it was very warm and dry. One year prior, in the 2010-2011 winter season, we experienced one of the coldest and snowiest winters on record here in Minnesota.

My memories of the 2010-2010 cold snap are very vivid. When I was in middle school, we had a field trip up north to Deep Portage. While schools were closing due to the cold weather in central Minnesota and the metro area, we still braved the cold and learned survival skills, snowshoeing, and a lot of other outdoor fun. The air temperature at Deep Portage was a warm -26°. It wasn’t just the temperatures that were cold. The coldest wind chill value in the state was a frigid -46° at International Falls.

It is important to note that no matter if we are in an El Niño or La Niña, it doesn’t provide us with an exact forecast for winter. It’s more of a general idea of what we can expect. NOAA also noted in their 2021-22 Winter Outlook that it does not include any seasonal snowfall projections in its winter outlook because snow forecasts are generally not predictable more than a week in advance.