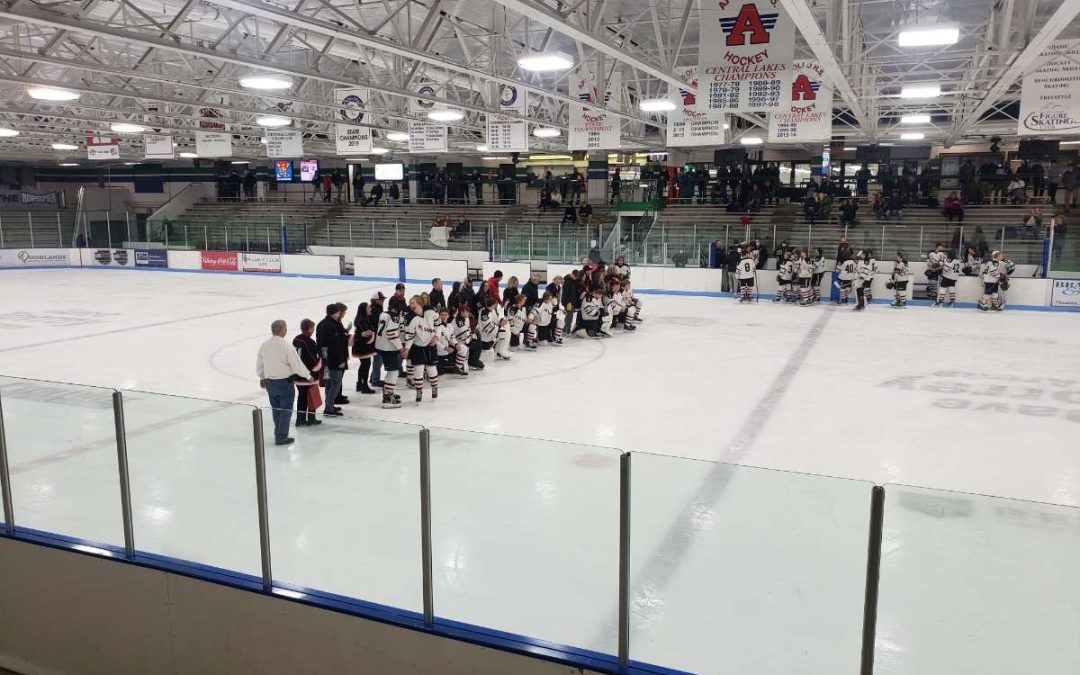 After a strong string of games last week, the St. Cloud Crush (5-11-3) varsity hockey team returned to home ice on Monday night with a conference matchup against the Willmar Cardinals (5-14-0). Monday marked Senior Night for the Crush, honoring the 13 players on roster in their final season with St. Cloud. The Crush entered Monday’s game fresh off their second two-game win streak of the season with wins against River Lakes and Sauk Rapids Rice.

Action inside of the Municipal Athletic Complex started early by the upperclassmen with the game’s first goal by Senior Nick Matanich (1-0) ten minutes into the game. It took 2 minutes for Matanich to strike again in the first period with the Crush shorthanded after a Ryan Behl holding minor (2-0). With St. Cloud dominating the pace of play all throughout the first 17-minutes of the game, the Cardinals thought they could survive the first down by two. Junior Andrew Cumming thought otherwise, netting his first of the game off nifty passing by Senior goaltender Wyatt Lee and defensemen Ripley Garden with just 2.5 seconds on the clock (3-0).

Leading by three heading into the second, the Crush came out the locker room hot. Continuing domination over the Cardinals, St. Cloud tallied another goal five minutes into the second frame with Garden on the back door of Willmar netminder Braxton Hied (4-0). From their more goals came early and often for the Crush as fellow Senior Liam O’Donnell netted his second in two games from the blue line to extend the St. Cloud lead (5-0). Penalties were riddled throughout the second period. With Junior Ben Eiynk in the box for cross checking, the Crush continued physical play shorthanded. With seven minutes left in the second period, Cumming sprung a breakaway through the netural zone then rifling his second of the game past Heid for St. Cloud’s second goal a man down (6-0). On the same penalty kill with the powerplay expiring for Willmar, a new face in Junior Sheldon Shyiak joined the party beating Heid on a wicked wrister for his first career goal (7-0). The Crush ended the game with three goals shorthanded. Another new face would pot his first career goal and fittingly it was another Senior in Bryce Vasek two minutes after Shyiak (8-0). St. Cloud eased into the second intermission with a commanding lead already at their highest goal tally of the season.

The third period saw the clock in running time, but the Crush did not let up offensively. Peppering shots any chance they could, St. Cloud was held off the board in the third after Hied caught his stride. The final buzzer rang on Senior Night with the Crush (6-11-3) cruising to an 8-0 win against Willmar (5-15-0). Three players skated their way to multi-point games. Garden finishing with one goal and two assists. Matanich tallied two goals and an assist, and Cumming quietly notched an impressive six-point night with two goals and four assists. No performance as impressive as Senior goaltender Wyatt Lee collecting his first shutout in his first career start at the varsity level and picking up an assist as well.

The busy week continues for the Crush as they continue with three more games this week. Alexandria will host St. Cloud on Tuesday night at 7:15 CST. St. Cloud will return on the road Thursday against Sartell and Saturday in Bemidji to cap off four games in six days. All games can be heard on 97.5 Radio X.