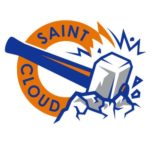 A struggling St. Cloud Crush (4-11-3) team was looking to pick up their second straight Central Lakes Conference win over Sauk Rapids-Rice (5-13-0) Thursday night, whom have lost three of their last four. A good crowd was on hand at the Municipal Athletic Complex to watch this cross town rival matchup as we enter the final month of the MSHSL season.

The first three minutes of the game would be a precursor to the rest of the night, a lot of open space allowed for both teams to use their speed and create odd man rushes. St.Cloud had to weather the early storm while Senior Goaltender Ben Condon settled in. 5:45 minutes into the period saw the first goal of the night from Junior forward Andrew Cumming who was crashing the net after a shot from the point by Liam O’Donnell (1-0). The physicality picked up after the opening tally, but did not derail the offensive opportunities for both sides. As the period was winding down, it would appear the Crush were going to take a one goal lead into the locker room. The Storm had other days, a failed clearing attempt by St. Cloud put the puck on the stick of Caleb Euteneuer, he fired a shot on the ice towards awaiting forward Luke Pakkala in the slot who redirected up high above the blocker of Condon to beat the buzzer showing one second left on the clock (1-1).

A frustrated Crush team needed an answer fast to get the positive buzz back going in their home building. That answer would be Cumming once again less than a minute into the period. Scooped up a turnover off the boards, walked into the slot, moved the puck to his backhand and shoveled it past netminder Zach Parker (2-1). Sauk Rapids-Rice continued to have their chances at the other end, but it appeared Condon was going to have one of those impressive nights we were accustomed to seeing a season ago. The Storm had four or five open nets and a sprawling Condon would slide over to make incredible saves to keep them off the board. With their netminder so locked in the Crush could play more freely. More time in the offensive zone was wearing down the storm, a bouncing puck to the blue line landed right in front of defenseman Ryan Behl who ripped a slap shot on the ice that bounced twice before going through the legs of Parker and into the back of the net (3-1). Penalties began to pile up in the middle frame giving both teams the man advantage. That would not favor the team with the extra man, O’Donnell picked up a loose puck at neutral ice and skated down the left wing shorthanded and let go a laser to give the Crush a three goal lead after two (4-1).

The final frame was filled with more larceny from the Crush netminder and frustration from Sauk Rapids-Rice. Ben Condon would finish with 24 saves on the night. The power plays for both sides were stymied in the contest, but it was not for the lack of effort. The 4-1 score would hold up in the final 17 minutes and the Crush skated off on a two game winning streak, to which they have not seen since the month of December when they beat Brainard and Rogers consecutively.