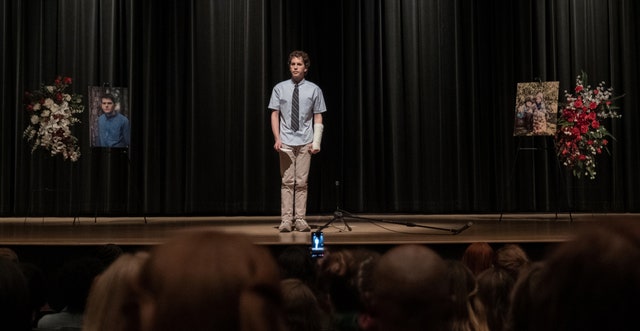 The movie can be summarized much like this image: Evan Hansen, center stage, doing nothing interesting, while the interesting characters are off to the side. Photo Courtesy of Erika Doss and Universal Pictures

I have never watched the Broadway performance of Dear Evan Hansen, and after watching the movie, I don’t think I ever will.

Dear Evan Hansen is a musical starring Ben Platt as Evan Hansen, an alleged high schooler who finds himself at the center of attention after a letter he wrote to himself is mistaken as a student’s suicide note addressed to him. Despite not knowing the student, Connor, very well, Evan pretends they were best friends to get closer to Connor’s family, and his sister – who happens to be his crush.

I say he is an “alleged” high schooler because Evan looks like a 30-year-old from Silicon Valley who infiltrated the school. Ben Platt is 28 years old, and he’s playing a 17-year-old.

It’s the Hollywood equivalent of Cinderella’s stepsisters cutting off pieces of their feet to fit into the glass slipper. There had to be younger actors fully capable of playing this role with a natural baby face. Jarred Manista, Andrew Feldman, even understudies Nathan Levy or Ben Ross. All of them are either in their low 20s or still in their teens and have musical experience. Why not choose them?

His hair is styled, assumedly, to appear naturally curly and youthful, but it looks more like a mullet than anything else. And who can forget the makeup? The puffy, foundation-caked face? I was forced to look at it for two hours. I cannot forget, so I cannot forgive.

This is an especially unforgivable choice considering Platt is acting alongside actors in their early twenties who look like high schoolers without huge changes to their appearance. It makes his half-baked romance with Zoe (played by Kaitlyn Dever) much more uncomfortable to watch. You already know he’s lying to her about her dead brother, but when he looks so much older than her, it’s so much worse.

When the movie isn’t terrifying me with its lead cosplaying a high schooler, it lacks any visual interest. Only one song has any choreography whatsoever. The movie is just characters singing while sitting, standing, or [if we are lucky] walking. If I wanted to watch people singing in the hallway of a high school, I’d just go to a high school after theater practice.

What it lacks visually, it makes up for in… nothing, really. The story doesn’t reach a satisfying conclusion, the characters aren’t compelling, and the theme is muddled.

The movie seems so precious about Evan, so concerned that the audience might think he’s a bad person, that it does everything in its power to make him the softest, quietest boy who just needs a hug. And this soft, quiet boy happens to have the face of a 30-year-old.

As it is, Evan is neither in control of what happens to him, nor does he face a legitimate consequence for what he is responsible for. He doesn’t come up with the ideas that ultimately benefit him; side characters prompt him with their own ideas, and he says “ok”. That’s the extent of his autonomy. When the story reaches its conclusion, Evan is back where he started, but this time with a slightly more upbeat attitude. This is after he watched his own lie nearly tear apart a family, his crush dumps him [I hope] for lying about her dead brother, and the whole of his school rejecting him. This is the same person who was stated and shown, multiple times, to have severe social anxiety.

The movie is “about mental illness”, but it doesn’t explore it in a way that feels satisfying to me. It’s certainly there, because the characters are constantly talking about it, but it lacks realism.

The way the movie treats the Kickstarter in the second act is the stupidest way you could possibly try to “help” kids with anxiety. When his speech at Connor’s memorial inspires millions of people [we don’t see the speech, we get a pop-song], a bunch of students start up something called the Connor Project. This project primarily focuses on raising $100,000. Why? Well, it could go to pay for therapy, or medication, or just toward an already-existing organization that might need the money. But where does it go? An orchard. An orchard Evan lied about being Connor’s favorite spot. And this isn’t some sweet memorial just for Connor’s family. No, this is the driving force from the second act to the end. All the while, characters are acting like if the Kickstarter doesn’t get money or support, then people really don’t care about children with mental illness.

If the movie explored the character’s reasoning for it, maybe showed that they were so wrapped up in this project for selfish reasons instead of selfless ones, I would understand. But the story treats the orchard like it’s the one thing standing between mentally ill children and suicide. It’s so vapid and grandiose, and never once disproven by the story. They don’t realize how much care and attention these kids need or consider that maybe kids just have a chemical imbalance that could be fixed with a prescription. Those are never brought up. Nope. If you’re not paying for an orchard or spending all your time soliciting donations for this orchard, you just don’t care.

They don’t need an orchard, Dear Evan Hansen. They need therapy and medication.

I guess we really are all secretly dealing with our own difficulties like the movie said, and my difficulties are sung in Ben Platt’s falsetto.