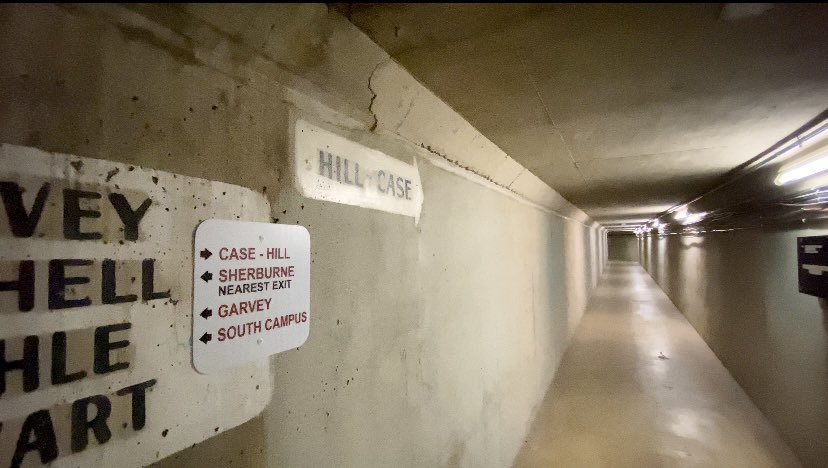 Winter is in full swing in the Granite City as snow blankets the ground and temperatures tumble below freezing. On the campus of St. Cloud State University, students are getting creative with ways to keep warm to and from class by cutting through buildings.

“All my classes are in Stewart Hall,” says St. Cloud State University student Adam Larson. “I park in the ramp, so I first go through the PAC [Performing Arts Center] then Atwood Memorial Center, and then over to Stewart Hall.”

Though students have found the best route that suits them, there used to be a different route they could take without going outside at all: Tunnels.

St. Cloud State University has an underground tunnel system that stretches from Husky Stadium all the way to Stearns Hall, connecting to every major building on campus.

The tunnels were built decades ago but were inevitably closed off to students due to safety reasons.

Now the tunnels are used strictly for maintenance.

“We have steam pipes, condensate pipes, chilled water–the campus is connected by a chilled water loop,” says Jay Black, Performance Monitoring and Evaluation (PME) Lead at St. Cloud State University. “It’s piped underground to all the buildings, and whenever possible, we tied it into the tunnels.”

That exposed pipe is the biggest safety concern and one of the main reasons why students no longer have access to the tunnels.

“The steam is all in the tunnels,” says Black. “There’s kind of a danger issue there if you have a leak or a joint would break. You’d have steam pressure at 125-pounds per square inch at 500-something degrees.”

Without a joint breaking or pipe leaking, the steam in the tunnels emits enough heat alone to make the tunnels hot.

Black says that the tunnels can reach up to around 120 degrees on a hot summer day. In the winter, they stay around 70 degrees.

The tunnels are unlocked from the inside to prevent anyone from getting trapped in the passageways, especially with the heat from the steam. This feature, intended for safety, led students to take advantage of all the open doors.

“People would get in the tunnels and go into other buildings [they weren’t supposed to have access to],” says Black.

The risk of students going into unauthorized buildings along with the hot steam led to the tunnels being sealed off in the 1980s.

Murals are spotted along the walls of the tunnels as a reminder of the days students walked its halls almost 50 years ago.

Some murals are paintings, while others also include quotes. One is even left unfinished with only the pencil sketch of a man on the wall.

One mural peeks through maintenance equipment and a few others list the names of students — students that were the last to walk through the long stretch of SCSU’s underground tunnels.