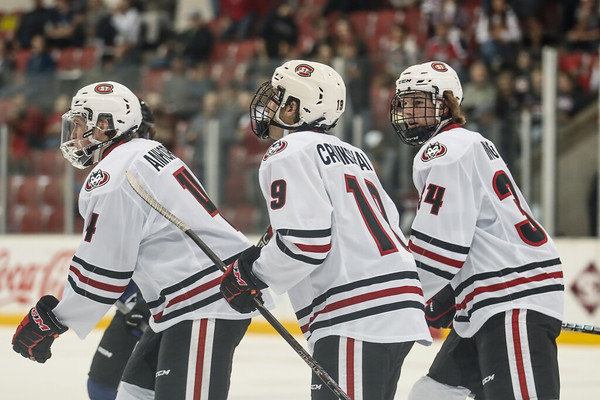 Article Written by Will Hanson.

It was a battle of top-20 teams at the Herb Brooks National Hockey center on Friday night, but the Western Michigan Broncos outworked St. Cloud State on their way to a 4-2 win.

In the first period, St. Cloud found it hard to stay out of the penalty box and get any pucks on the net. The Huskies finished the period with a total of one shot on goal and 8 penalty minutes.

Western Michigan cashed in on two late power-play goals in the first period coming from defenseman Aidan Fulp and forward Jamie Rome. Despite all of the penalties, the Huskies kept the Broncos off the scoresheet up until the final two minutes of the period.

It was a frustrating first period of hockey for the Huskies and it seemed like they couldn’t put anything together.

The Huskies finally got on the board in the second period when leading scorer Grant Cruikshank ripped one over Cameron Rowe’s shoulder from the high slot. That is the fifth-year senior’s ninth goal of the season and team-leading fourteenth point.”

After the game, Huskies head coach Brett Larson was asked what has allowed Grant Cruikshank to take off this season. Larson said: “He’s been good right from the start, his game doesn’t waver very often either. He’s a guy that’s always on the puck competing that can make plays, he’s got a really good 200 foot game and I just think he’s got some good chemistry with his linemates. That power-play has been pretty good when he’s on it. I think he’s a guy that we just trust in every area and he’s being rewarded for that.

The Huskies were once again in penalty trouble in the third period. Eight minutes into the third, freshman forward Grant Ahcan was given a five-minute penalty for head contact and ejected from the game.

Western Michigan scored on the ensuing power-play, their third power-play goal of the game. This one came from sophomore forward Max Sasson, his sixth goal of the season.

Despite the adversity, St. Cloud State did not go out without a fight. During the same Huskies penalty kill,  forward Micah Miller stole the puck from a Broncos defenseman and created a breakaway for himself. Miller slotted the puck through Rowe’s legs on his backhand to put the Huskies within one goal.

Miller is widely regarded as one of the best penalty killers in the nation. After the game, I asked Micah what makes him so good on the penalty kill: “I’d say just mentality. Obviously, everybody wants to be on the power play but at this level, not everybody is going to be. All of us penalty kill guys talked to [each other] if we get a chance let’s take it.”, Miller said. He led the nation with four short-handed goals last year and added his first of the year on Friday

Just three minutes after the Huskies cut the deficit to one goal, Luke Grainger scored for Western to give them their 2-goal lead back. The Huskies would get a few power-play opportunities towards the end of the game but were unable to put another one past Rowe as the game ended 4-2.

The Huskies played Friday’s game without captain Spencer Meier, who Brett Larson later said would be out on a “week-to-week” basis with an upper-body injury.

St. Cloud State travels to Colorado Springs next weekend to take on Colorado College in a 2-game series.