Women’s Hockey against University of Wisconsin 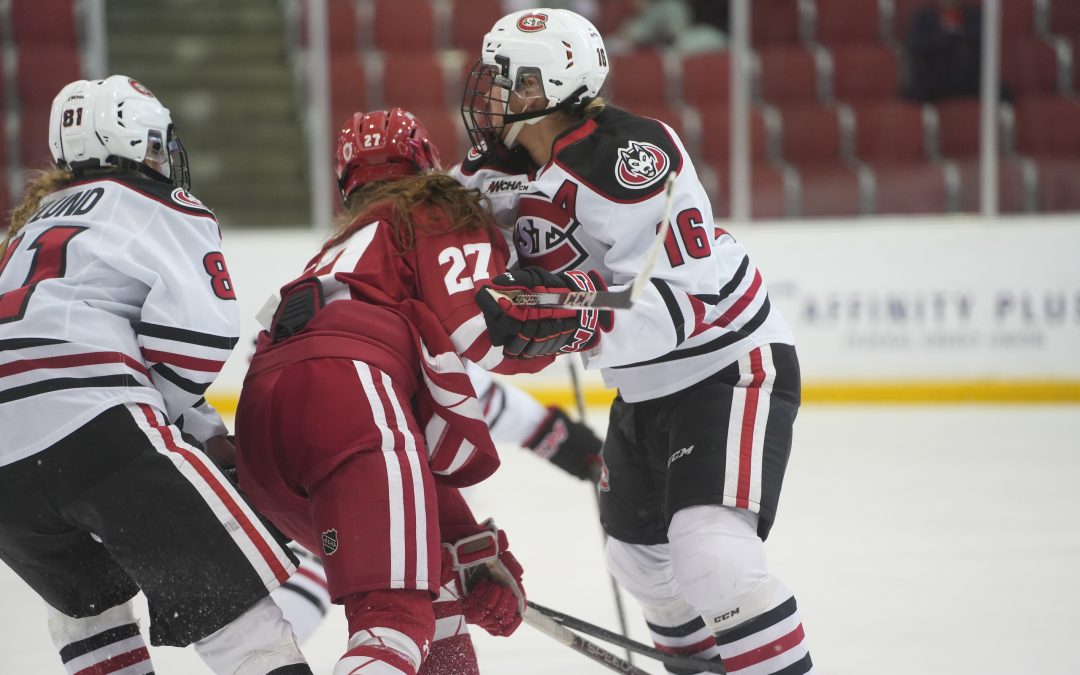 The women’s hockey team faced tough competition last weekend as top-ranked the University of Wisconsin was welcomed to the Brooks Center. Both SCSU and UW are members of the WCHA, and both teams were looking for a pair of conference wins.

Nicole LaMantia opened up scoring in the game at just about the five minute mark of the second frame. After goal one, the Badgers outpowered the Huskies, lighting the lamp two more times in the middle frame.

Lacey Eden’s goal came shortly after LaMantia’s goal to put Wisconsin up 2-0. The Badgers wanted to further separate their lead before heading to the final frame and Caroline Harvey came to the rescue, putting UW up 3-0 to comfortably head into the final 20 minutes.

After an action packed second frame, the Badgers continued to put on a show. Just after the three minute mark, LaMantia was on the boards again, netting her second of the game before Jesse Compher got one of her own, leaving the final score at 5-0.

The Huskies started off game two strong, looking for a series split with Wisconsin. Saturday’s matchup looked like a real WCHA game with how tight the game was being played.

The Huskies were able to go up early, with a goal coming from Jenniina Nylund before the five minute mark. Nylund’s goal would be the only of the first period with both teams looking to capitalize on each other’s mistakes.

The Huskies would look to further their lead with another coming from Jenniina to start scoring off in the second. The badgers were able to capitalize on the powerplay with the penalty assessed to Mackenzie Bourgerie.

Heading into the third period, the Badgers were looking to reset and gain momentum from their late second period goal. The Huskies kept the Badgers’ tough offense at bay until the dying seconds of the final frame when UW was able to tie the game with a goal coming from Casey O’Brien to force overtime.

The sudden death overtime would test both teams as there were less than two minutes left before a team would end up victorious. Caroline Harvey was able to beat Sanni Ahola to send the Badgers back to Madison with the series sweep over St. Cloud.

The Huskies are now 2-4-0 overall and 0-4-0 in conference play. Coming up next for the women’s hockey team, they look to take on another WCHA and in-state rival, the University of Minnesota this weekend with a home and home series.