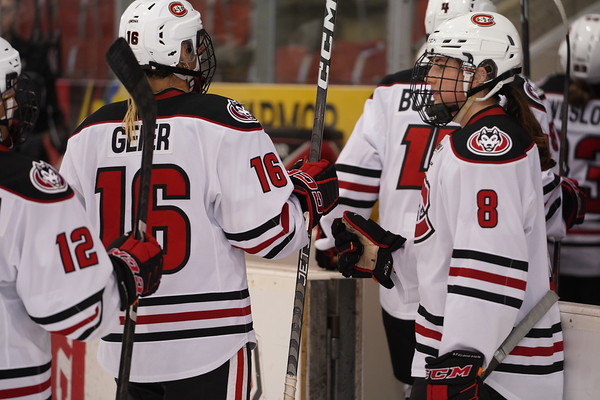 The women’s hockey team is no joke, starting their season off on the best note arguably ever. After sweeping Lindenwood last week, the team looked ahead to a conference battle with UST.

This series would again be a home and home series, with game one taking place at the Brooks Center. Friday night’s tilt would be a close game for the teams, with SCSU coming out on top, 3-2.

Junior Emma Gentry would start off scoring late in the first frame to send the Huskies into the break up by one. Gentry would net her second of the game in the opening minutes of the middle frame, coming off of a pass from Courtney Hall and Addi Scribner.

St. Thomas would pick up momentum, scoring two goals in the second half of the game. Lauren Stenslie would notch UST’s first of the night at the 16:18 minute mark of the second period, sending the teams into the final frame at a score of 2-1.

The Tommies managed to tie things up, with Maija Almich finding the back of the net a little more than halfway through the final 20. The Huskies continued to rally, although senior captain Taylor Lind would leave the game after a weird collision along the boards.

Courtney Hall would score the game winning goal at the 15:26 mark, leaving the final score at 3-2 and sending the Huskies into game two looking for the season sweep.

On Saturday, the team would again be without their captain, but rallied behind her from St. Paul, Minnesota. Lotti Odnoga from the Tommies would take an early penalty, resulting in Klara Hymlarova scoring on the powerplay to put the Huskies up by one early in the first.

The Tommies bounced back, scoring two of their own following Hymlarova’s goal, with Maija Almich and Lauren Stenslie scoring their second of the series. Jenniina Nylund would look to tie things up at two a piece before Alli Pahl would put the Tommies up again.

The Huskies took full control following Pahl’s goal, scoring four of their own, all unanswered. Olivia Cvar would tie the game up and Klara Hymlarova would score back-to-back goals, shorthanded and on the powerplay, notching a hat trick in game two.

Emma Gentry would score her third of the series to round out scoring in the final game of the series, putting the Huskies up by six and getting the series sweep over St. Thomas.

With their back-to-back sweeps, it was announced that the women’s hockey team had received votes in the USCHO polls and are sitting at 14th in the country. This is the first time since January 21, 2009, that the women’s team was selected in the national polls.

This season, under new Head Coach, Brian Idalski, the Huskies are making headlines for their perseverance. The team is now 11-8 overall, a number in the wins column they have not seen since the 2015-16 season when the team went 13-18-4 on the season.

Coming up next for St. Cloud State, they will again take part in a home and home series. This time, against the University of Minnesota-a team they just beat for the first time since 2007.