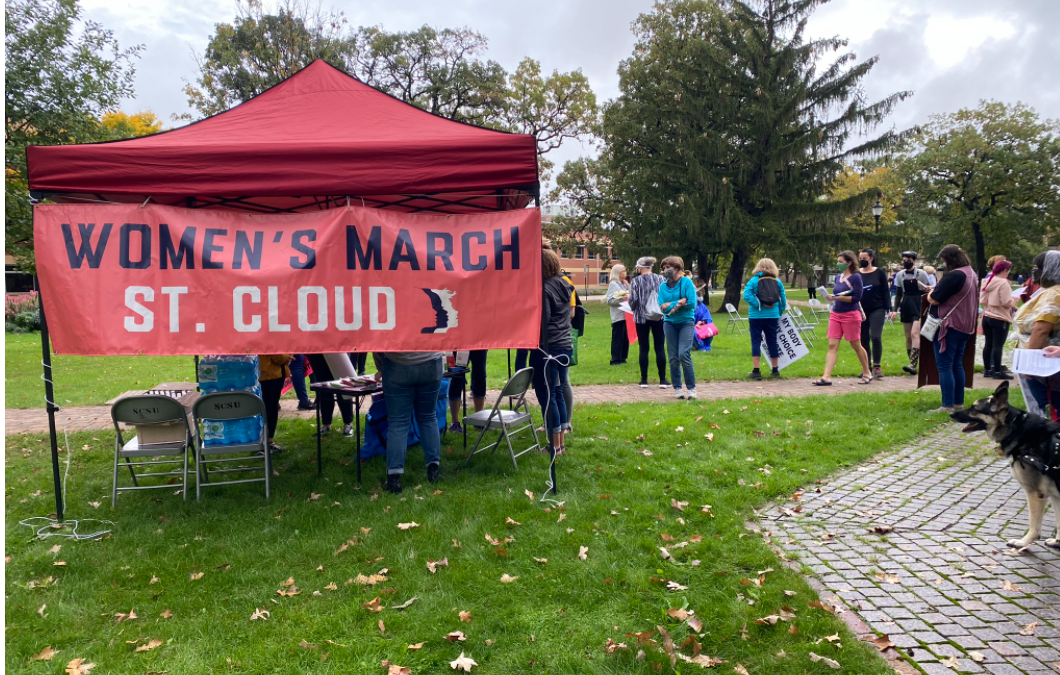 On October 2 a march was held for reproductive freedom photo credit Isabella Kraft.

In the wake of the Texas abortion ban and the Supreme Court reconving orgnaizations from the SCSU campus and the St. Cloud community came together to host a march and rally for reproductive freedom.

The SCSU Women’s Center planned the Rally for Reproductive Freedom along with help from their on and off campus sponsors, the Multicultural Student Center, Period Organization, Students for Choice, Wright County Indivisible and Planned Parenthood of St. Cloud.

“Since the Texas abortion ban makes it literally impossible for women to get abortions in Texas,” Women’s Center programming and research assistant Kara Cowell said. “It is already causing a detrimental impact to the healthcare communities in Texas and the states around Texas where people are fleeing to. There are also mimic bans that are being put up in other states from the Texas ban and we don’t think that anyone should be restricted because of their body, it is ultimately their choice.”

The rally began at 11 a.m. in Barden Park with marchers gathering around the foundation. A brief rundown was given about the march route, march etiquette such as not yelling back at hecklers, safety guidelines and a rundown for the march chants. Afterwards the march proceeded up on 5th Ave. S to Division St. and turning around 7th Ave. S going back down 5th Ave. S.

“We think that marching for reproductive freedom is important because it’s so often in states especially in the south where reproductive freedom is overshadowed that people don’t hear enough voices about why it is important,” Cowell said. “Being in Minnesota we know that we do currently have a good standing but also we don’t want to become Texas.”

As the march reconvened in Barden Park, speeches were made by students and partner organizations. Speakers spoke on what reproductive freedom meant to them, their frustrations on the abortion ban in Texas and the hopes that the Supreme Court can reverse the ban.

“As a 20 year old woman in Minnesota I can not imagine the fear of being a woman in Texas,” student speaker Caitlin Hegle said. “It is the work we do here that changes the country around us, though we are in St. Cloud, MN it is people like us that make a difference in the world.”

In addition to the rally and march at Barden Park a demonstration was held later in the day in the Barnes and Noble parking lot. There demonstrators held signs towards the Division St. traffic to bring awareness towards the issue.

“Basically we are here to stand up for the fact that women deserve to have choices that we need to have access to medical decisions and stop punishing medical professions for making medical choices for their patients,” Cowell said.

The march in St. Cloud was one of 600 marches that occurred on October 2 to speakout against the Texas ban. The Women’s March national organization had bigger marches in larger cities such as Minneapolis. After realizing that some students and community members do not have the access to go to other cities the SCSU Women’s Center decided to put on their own sister march under the national organization.

“Whether I agree with it or not it’s not the issue, it’s the issue that other people shouldn’t be making that decision for a person,” demonstrator Deb Quigley said. “It’s a personal decision.”

The goal of the rally was to spread the word about the importance of reproductive freedom, the hope the Supreme Court will reverse the ban and to codify Roe v. Wade. This means that Congress would pass a law affirming a person’s right to an abortion without state interference.

“The biggest thing I like to tell people about the pro choice movement is that we are not pro abortion we are pro choice, pro access to abortion, access to birth control, access to all of the resources and opportunities that are available,” Cowell said. “We don’t believe anyone should restrict those opportunities because of where they live, who they are or what they look like.”