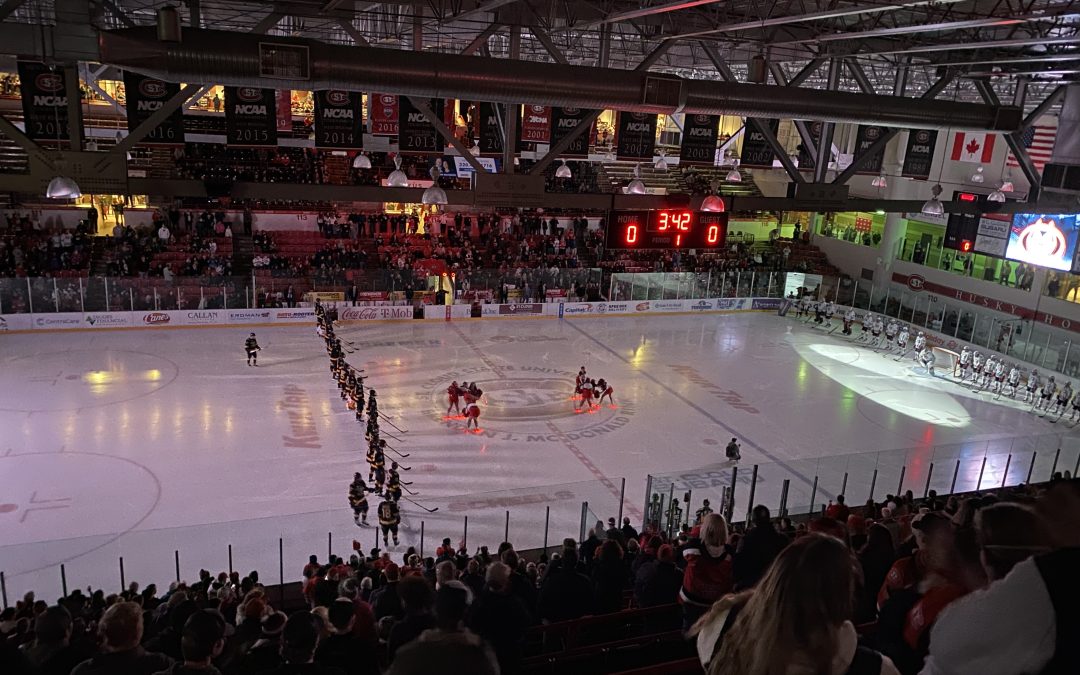 Easton Brodzinski hadn’t been through a drought like that in quite some time, if ever. The St. Cloud State 5th-year Senior snapped a ten-game goalless streak on Friday night in the Huskies 4-1 win over the Colorado College Tigers.

“It felt good,” Brodzinski admitted with a smile on his face. “Obviously, that little drought there sucks, but it could happen to anybody. I just stuck to my game and kept getting to the net. That’s where good things happen.”

The Huskies sorely needed Brodzinski to break free of this funk. They’re in a dog fight (pun intended) to secure home ice with the Duluth Bulldogs for the NCHC quarterfinals in just a few weeks. The Huskies have put themselves in a tough spot to do so. They’ll need to finish the season perfect if they want to return to the Herb Brooks National Hockey Center for another home game after tomorrow’s regular season home finale.

“Playoffs started for us on Tuesday against Duluth,” said Husky Head Coach Brett Larson. “Every game now, because of how these last ten games have gone, has made it a playoff game.”

The last ten games that Larson mentioned has been one of the worst stretches in his tenure.

Perhaps this series with Colorado College is exactly what the doctor ordered for the struggling Huskies. Friday night wasn’t a perfect game for the Huskies, but it was one where they played well enough to beat a team that they should.

Alongside Brodzinski, the Huskies struggling power play resurrected itself Friday night. The Huskies drew their first man-advantage chance 8:08 into the game and took just 36 seconds to convert. Off a set play, Spencer Meier smacked a one-timer past Colorado College goaltender Matt Vernon to give SCSU a 1-0 lead. Husky Graduate forward Kevin Fitzgerald earned the primary assist on the goal for his 99th career point.

It was Brodzinski who finished next for the Huskies. He corralled a rebound from right on top of the crease. Dropping to a knee, Brodzinski was able to spin around and slip the puck past Vernon to give the Huskies a 2-0 lead heading into the 2nd period.

“We talked earlier before the game about just playing the right way,” said Larson. “Playing with discipline and playing hard. Getting to the net and if you did, things would pay off for him. He got that one right in front, so I thought it was a good play by Sammy (Hentges) up top. Brodzinski got to the net and worked for the rebound. Really good to see him going again.”

Larson admitted it’s nice to see that line going as a whole again. The Nolan Walker, Hentges, and Brodzinski line has been its most potent when Hentges has been in the lineup for SCSU.

“It’s like a shot of adrenaline,” Larson said of having Hentges back in the lineup. “You see it. He brings speed every shift and he’s hard to defend. His speed pushes people back on their heels.

Hentges himself was a star of the game in his own right. After notching an assist on Brodzinski’s goal, Hentges gave the Huskies a little bit of separation and comfort.

The Huskies drew a second power play to start the 2nd period and Hentges again made quick work of the Tigers penalty kill. Coming through neutral ice, Hentges ran a give and go with Veeti Miettinen and burst into the offensive zone on his backhand ripping a shot past Vernon to give SCSU a 3-0 lead.

After Logan Will scored a power play goal for Colorado College to bring it back to a 2-goal game, Hentges made life comfortable again for St. Cloud. Again, on the power play, Hentges capped off a beautiful passing sequence to push the lead back to three at 4-1.

“That goal was big,” Larson said. “The momentum was starting to shift in their favor a little bit, so luckily for us our power play was on tonight and able capitalize on that opportunity. Being able to extend that lead was probably the most pivotal moment of the game.”

The Huskies power play finished the night 3-of-6 and had multiple good looks. The unit still sits first in the nation at 33.3%. Perhaps one of the major things that was lost amongst the good vibes surrounding this Huskies powerplay success was the one notable change they made to their special teams. Freshman Jack Peart replaced Seamus Donohue.

“It wasn’t anything against Seamus to be honest,” Larson quickly highlighted when asked about the change. “Seamus has been getting a ton of minutes for us and we thought Jack developed to the point where he could be good in that spot. He could get some more minutes there, but we really need Seamus 5-on-5 against other teams’ top lines and on the penalty kill.”

Larson has relied on some of his older defenseman throughout the season. Now he feels as if he needs to manage the minutes better of the players who see the ice in all situations. Larson alluded that he felt the change helped both players have better games.

It was a quiet night for David Hrenak between the pipes for St. Cloud. The Huskies 5th-year goalie stopped 21 of 22 shots and posted his second consecutive game allowing just 1 goal against while making 20+ saves. Vernon stopped 28 of 32 shots for the Tigers.

The Huskies will look to pick up the sweep on Saturday night. It would be their first since January 21st and 22nd when they swept Miami at home. Puck drop on Saturday is set for 6:07 p.m. from the Brooks Center.