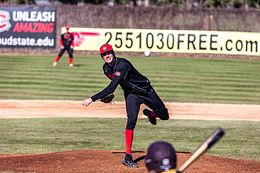 A cold and snowy February is not a recipe for baseball season in the state of Minnesota, so 15 hour bus trips and multiple stops on your way down south is necessary. This year’s destination, Arkadelphia, Arkansas, home of the Henderson State Invitational where St. Cloud State will began their journey of new season. High expectations are in order for the Huskies this year, a deep veteran led pitching staff and multiple returners in the lineup has them pegged as the number three team in the NSIC preseason poll. Four days, four games, simple as that.

Opening day was as perfect of weather you could have for baseball on a Thursday afternoon, and the Huskies would take on the host team Henderson State University. Trevor Koenig (4.2 IP, 5 H, 4 R, 2 BB, 6’K) was on the mound for SCSU and had a rocky first start. The Reddies were able to get four runs on the board in the first two innings before Koenig was able to settle down and retired seven straight at one point. The bats didn’t wake up until mid-way through the game, in the top of the 5th, St. Cloud was able to scratch four runs across to tie the game capped off by a two-run shot to deep left by transfer Sam Riola (1-for-5, HR). Both teams would get one more run via a sacrifice fly, but then Henderson got their own two-run bomb by Grayson Haskins in the 8th to take a 7-5 game. That’s how the game would finish and St. Cloud drops their opening day game.

The next day was a new challenge, and to put this one in plain words this was not a good day at the ballpark for St. Cloud State. Ryan Duffy made his Husky debut and he was unable to get out of the second inning due to the offensive explosion by the Griffons. MWS was 0-3 coming into the game and were due for a big after being held in check the first week of their season. That cumulated to 20 hits and 18 runs on the afternoon for the Griffons. Every ball that touched the barrel found and open piece of turf at Clyde Berry Field. St. Cloud States lone run came in the 6th when Senior Paul Steffensen (1-for-4, 2B, RBI) doubled to left driving in Sam Riola. Missouri Western hands St. Cloud their 2nd loss in as many days by a final score of 18-1.

The bats were awaken much earlier in this game and St. Cloud took advantage in the top of the first. Tate Wallat (1-for-4, 2B, 2 RBI, R) doubled to drive in the first two runs followed by a Drew Bulson (1-for-3, RBI, BB) single to give the Huskies a 3-0 lead. Luke Tupy (2.1 IP, 5 H, R, BB, 2 K’s) got the ball for SCSU and was in and out of jams throughout his start before he was eventually relieved by Fabian Villegas after giving up a run in the 3rd.  Villegas (4.2 IP, 0 H, R, BB, 5 K’s) was phenomenal in his first appearance of the season eating up innings that the Huskies desperately needed. Not much was happening behind him however, with the bases loaded and one out St. Cloud was only able to get one run across to restore a three run lead (4-1). The Bearcats started to string hits together after that and put up a three spot in the 8th to bring the game back to level and take all the momentum from the Huskies. There was nothing St. Cloud could do after that, in the bottom of the 9th NWMS piled on the pressure. Man on second, one out, the ball was put in play towards Max Gamm at Shortstop. He made a great play to even get to the ball, fired a long throw across the diamond on target but not in time to get the runner. In the meantime, the Bearcat at second base continued to run around 3rd and headed home to beat the tag by Drew Bulson at the plate to walk it off for NWMS 5-4. A heartbreaker for St. Cloud and they fall to 0-3 to start the season for the second straight year.

A new ballpark and a new day was in store Sunday for the weekend finale of the HSU Invitational against the other team in Arkadelphia, Ouachita Baptist. Tommy Thompson (4.2 IP, 4 H, 4 R, 3 BB, 3 K’s) was the first right hander to start for St. Cloud this season and was much better than the numbers showed. The scoring started with Sophomore Mitchell Gumbko (1-for-4, HR) who hit his first home run as a Husky in the 3rd. Later in the inning, an error committed by the Tiger second baseman allowed Tate Wallet to score and push the lead to two. The 5th inning was trouble for Thompson who gave up a 2 RBI double and 2-run Home Run back to back and the Tigers took a 4-2 lead just like that. Jack Habeck (3.0 IP, 3 H, R, BB, 2 K’s) came in relief to finish the inning for St. Cloud. This time, St. Cloud would get a response they did not have all weekend, Max Gamm (2-for-4, 2B, 3 RBI) smoked a bases clearing triple into left and the Huskies took back a 5-4 lead. Ouachita Baptist would tie the game at 5 with a sacrifice fly in the 6th. The next half inning, Paul Steffensen (1-for-3, 2 R, RBI) would go yard for the first time this season and the back and forth affair continued. The Huskies would give Ethan Lanthier (1.1 IP, 0 H, 0 R, 2 BB, 0 K’s) the true freshman some run support and it was his job to close the game and he did. Lanthier picks up his first career save and St. Cloud State ends the weekend on a high note with an 8-5 victory.

After a week off, the Huskies will hop on another bus and head to West Virginia for another four games including two against Salem, one against Mansfield and Ashland University. You can listen to all the games on the KVSC sports stream.