Women’s hockey holds on for a split vs St. Thomas 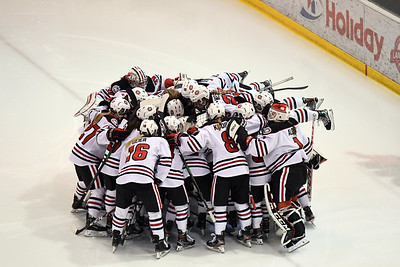 After a disappointing loss at the Herb Brooks National Hockey Center on Saturday night, St. Cloud State (8-16-2) would finish the season series with St. Thomas (5-20-1) on the road in Mendota Heights Sunday afternoon. The Huskies had extra motivation to knock off the Tommies who could jump St. Cloud in the WCHA standings with a win.

St. Thomas made no changes to the lineup from the previous night and stayed with Alexa Dobchuk in between the pipes. St. Cloud gave Emma Polusny the day off after a 30 save performance and decided to go with Sophomore Sanni Ahola. The first period was very much a feeling out process, both teams seemed more concerned about giving up high quality chances than creating offensive opportunities. Unlike yesterday, St. Cloud State dominated time of possession and was much sharper during the opening period. The Huskies would finish the period with 10 shots on goal to the three by St. Thomas. SCSU had their lone power play of the afternoon, but were unable to capitalize. St. Thomas would have the best chance of the period however after Luci Bianchi got loose on a breakaway, she tried to slide it through the five whole of Ahola but she shut the door and the game stayed scoreless after one.

The energy within the St. Thomas Ice Arena was rising in anticipation of the first goal of the contest, the crowd that accumulated is a great precursor to a new rivalry developing in the WCHA. Courtney Hall would take the lone infraction of the night for St. Cloud and give the Tommies a chance with a man advantage that they would squander. With the Huskies back at even strength they went back on the charge and it was Emma Gentry with her patent wrist shot to give the Huskies a lead (1-0). It would not take long for the Huskies to find their second, 18 seconds later, Nicole Ness receives a stretch pass from Mckenna Wesloh down the left wing. Her wrist shot from the circle ricochets off the glove of Dobchuk, bounces behind her and into the back of the net for Ness’s 2nd goal of the season (2-0). With a drop of a hat, SCSU had a two goal lead and it was deja vu all over again. After blowing the two goal lead yesterday, it was important for this club to hold onto the momentum. Unfortunately, the Tommies would strike back in the least conventional way. Maija Almich who was having a solid game for St. Thomas would get rewarded with a fortuitous bounce of the in boards that sent the puck into the crease and knocked in by the pad of Ahola as she tried to scramble back (2-1).

One last period on the weekend for St. Cloud State would make a bad series good or a bad series even worse. The sense of urgency was apparent for both benches, St. Cloud wanted to deliver the dagger and St. Thomas wanted a repeat of Saturday nights comeback. Chances were coming at a premium in period number three, St. Cloud State buckled down defensively and gave little time and space for St. Thomas to make plays. St. Cloud State was patient and waited for their opportunities, one of which was the least promising. With just over a minute to play, Allison Green threw a shot from the near side boards towards the cage and cashed in on her first collegiate goal (3-1). You would think St. Cloud would coast to a victory, but that was anything but the case. With the extra attacker, St. Thomas cut the lead back to one with a backdoor tap in from Allie Monrean (3-2). 26 seconds left was plenty of time for the Tommies to find the equalizer and they almost got it. Abby Promersberger set up Bianchi in the middle of the slot for a one timer that Ahola fought off in the dying seconds of the period to secure a Husky victory (3-2).

St. Cloud State (9-16-2) staves off St. Thomas (5-21-1) in the WCHA standings and picked up crucial points heading into a busy stretch in their schedule. The Huskies take on the Buckeyes of Ohio State tomorrow afternoon at 2:00 CST inside the confines of the Brooks Center. Game can be heard on 88.1 FM KVSC or watched on Big 10+.