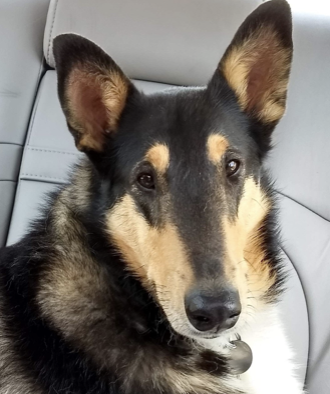 Photo of River from De-Stress with Pets. Photo Courtesy of Terri and Dan Weyer

De-Stress with Pets is a free event held by Healthy Huskies where the SCSU community can spend time with patient and loving therapy dogs. Every Thursday this Spring semester, therapy dogs will be in the first-floor lounge of Eastman Hall from 11:30 a.m. to 1 p.m.

Similar events have been held at SCSU for 10 years now. Different organizations, including the Counseling and Psychological Services (CAPS) and the Department of Mass Communications, ran the event for students in the past. Previous events were infrequent but included more animals, including therapy dogs and kittens; typically, hundreds of students were in attendance.

In 2017, Healthy Huskies joined the market to help with event expenses. After shifts in responsibilities, they are now the sole sponsor. Currently, with COVID restrictions, the event is slightly smaller, held once a week, and fewer dogs in attendance to limit the student and staff numbers. Expenses can be spread out over several weeks rather than 1-2 times a semester, which creates the same marketing investment to get the word out.

The Central Minnesota Therapy Animal Association (CMTAA) has partnered with the De-Stress with Pets event and provides trained therapy dogs. It’s important for the SCSU community that the dogs coming to the events have temperament and patience. Erica Karger-Gatzow, LICSW, Assistant Director of Health Promotion and Marketing with Healthy Huskies said, “This year we’ve hosted about 11 different teams- new dog friends to meet every week!”

The University of British Columbia conducted a study in March 2018 on therapy dog sessions’ effect on student’s emotions and stress. 246 students were surveyed after a drop-in therapy dog session, like De-Stress with Pets, where students spent time petting, cuddling, and chatting with therapy dogs. Researchers found significant reductions in stress, increased happiness, and an increase in energy immediately after the session.

Therapy dogs brought to the event are patient and loving. River, a 4-year-old smooth collie, was one of those in attendance at an event. In 2021, River passed her Canine Good Citizen class, a class designed to teach dogs good manners and obedience, and then the Pet Partners Therapy Animal certification test with her parents, Terri and Dan Weyer.

However, the road to becoming a therapy dog was not always a “walk in the park,” as River’s story includes times of great adversity and persistence.

In August 2019, when River was one and a half years old, she was accidentally run over by her family’s biggest horse. Immediately, River lost consciousness. Dan Weyer noticed, shortly after the incident, that she was taking shallow, sporadic breaths. He put River in his truck and was on his way to the St. Cloud emergency vet, BluePearl Pet Hospital, 35 miles from their home. Terri met up with Dan and River at the clinic.

On the ride to the vet, River was in and out of consciousness gasping for air. Dan was doubtful that River would survive. Gina Kobluk, Doctor of Veterinary Medicine (DVM), met River and Dan at the clinic. River was rushed for x-rays and emergency thoracentesis, which is a procedure that removes fluid and air from around the lungs.

She was diagnosed with pneumothorax (air around the lungs) with pulmonary contusions (bruised lungs), secondary to thoracic (upper spine) trauma. While River was unconscious and on oxygen, Kobluk spoke with the Weyer’s after the procedure and told them the procedure had unknown outcomes for survival.

Before leaving the clinic, Terri and Dan went back to see River, as she was staying the night. She was not responding to their voices. The technician did not think River would survive the night. Terri describes herself as a prayerful person, so she began prayers for River.

The clinic said they would contact the Weyer’s only if River passed away. By 3:30 a.m., there was no call. They called the clinic themselves because they could not wait any longer. The clinic said she had slight improvement and needed to be moved to a non-emergency vet by 8 a.m.

Dr. Jeffrey Nelson looked over River as she spent another day and a half in the hospital where she made continuous improvement. She had a strong will to live and was able to breathe on her own. Terri was finally able to bring River home.

While recovery is never easy, River was able to improve quickly and with relative ease. She needed to stay in a confined area and stay quiet. She is well crate trained and only wanted to sleep. Making improvements each day, she was finally walking around after just a week. River was happy to be home with Splash, Terri and Dan’s Australian Shepherd. “Splash did not leave the side of River’s crate while she was confined,” said Terri.

Despite her setbacks, River is doing excellent now. She is expected to have mild neurological damage but nothing that interferes with her happiness and quality of life.

Terri Weyer knew River had the temperament and attitude to be a great therapy dog since she was a puppy. Terri said, “I am so proud of River, and she improves my quality of life every day! She is a gift, and I am so pleased we can share that with others through our therapy work.”