SCSU Hosts The Bias Inside Us Exhibit 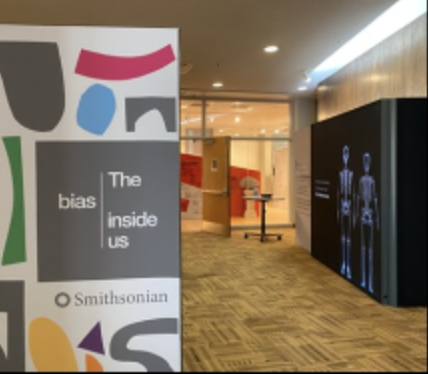 The Smithsonian exhibit aims to educate on the science behind unconscious bias. Photo Credit Isabella Kraft

Everyday snap judgements and assumptions are made by people subconsciously. Though seemingly innocent, overtime these quick thoughts can build up turning into biases.

Bias is an ingrained judgement in one’s brain that is unconscious, yet can be adjusted. Studies have been done to determine there is a psychological science to how bias is formed and works. The Bias Inside Us exhibit, on display in Atwood Memorial Center, offers interactive and reflective modules regarding what bias is, how it is formed and solutions to combat it.

“The Bias Inside of Us is about awareness, about uncovering that space in such a way that we can be curious with ourselves,” psychotherapist Corey Yeager said. “So when you go through the exhibit when you engage with the exhibit it makes you curious about how you see the world.”

Originally the exhibit was intended to be a mobile Holocaust museum. Project director Dan Wildeson was contacted to be a consultant for the exhibit, but the idea was changed as it developed.

“It eventually became something that was a conversation around bias which is kind of where all these things begin anyway,” Wildeson said.

As the idea grew, Wildeson wanted to find more insight on how people engage with museums. The Science Museum of Minnesota was contacted and he was referred to talk to the Smithsonian Institute, which became on board with the project.

Wildeson was made a project director and helped concentrate the new exhibit into dealing with unconscious bias and how it works in the brain.

“Understanding how the brain works in relation to directing perceptions, perspectives and judgements is something that needs to become more conscious in us,” Wildeson said. “The process of thinking through and becoming aware of what might be unconscious biases and what impact they have on our behavior and our lives and the lives of others.”

In addition to the exhibit Wildeson invited guest speakers to come talk about the science of bias on campus. One of which was the Detroit Piston’s psychotherapist Corey Yeager.

Yeager discussed what bias is, how it has an active role in daily life without being noticed and ways to combat bias.

“The brain developed over many thousands of years, so it has developed many ingrained intuitions,” Yeager said. “The brain is going to fire in such a way that intuition starts to set in so I don’t have to think about something specifically, it just kind of becomes. That did not happen in five or ten years that has happened over multiple generations of human existence.”

Yeager stressed that most bias is unconscious and it occurs most often in the context of gender, race and age. Bias can be activated by stress, time pressure, multitasking or where there is a lack of knowledge.

To combat bias, Yeager stated a reflective process can be used to redirect the brain out of quick thinking habits.

“That is the first step in saying what can I do with this moment, and I may start to look for bias in my thinking,” Yeager said. “If we become more aware of the opportunity that bias plays in our lives everyday then we may be able to face that process head on. And more deeply understand that process but ourselves in the context of that process.”

The Bias Inside Us will travel next to the West Acres Mall in Fargo, N.D. then around the country, returning to Minn. in 2022. The exhibit will remain in the Atwood Memorial Center until Sept. 30.

“I think what makes this such an important exhibit is that bias is part of the human condition for everybody,” Wildeson said.